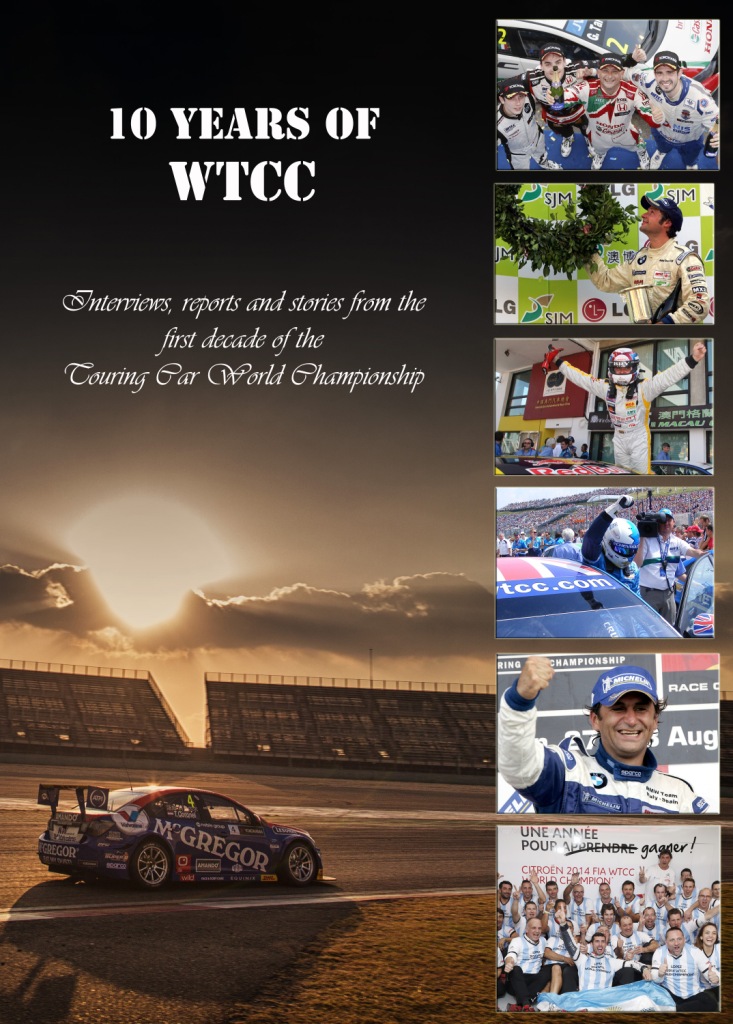 The programme has been running under the title “10 years of WTCC” was much more than a book. It was panned to be a charity programme, sending all the incoming of it (over the expeditures) for charity foundations nominated by the driver. Unfortunately finally our expeditures were much more than our incomings.

We still have some leftover copies, and if somebody orders one, they need to pay only the posting, and we ask them to send a price of a book to one of the nominated charity foundations. These are not huge amounts, be we still can help their works with this.

If you wish to order a book, please e-mail to: turaautovb (at) gmail (dot) com. Thank you!

We all know how the Touring Car World Championship has started and where we are now. We know what the Yokohama Trophy is and how it influenced the story. We know what it means to be a “work driver”, and how these factory teams have vanished from the World Championship, or what it means to be independent…
But do we know it from the point of view of the organizers? How to organize and run a world championship? Is it a dream work or a nightmare to be an organizer, a promoter, a manager or a Safety Car driver in  WTCC? Stories about founding and rising a family like this, via interviews with the oldest members of the family…

Club 100 – An Extraordinary Hall of Fame

20 drivers. 20 lists of results. And much more! 20 special stories about humanity, love, friendship, stubbornness, talent, humor, loyalty, leading by example, being a hero or simply being a man. 20 drivers’ profiles, a little bit upside down and personally.

“My best WTCC weekend ever …”

Once a Hungarian poet wrote: “It’s necessary: men themselves should talk about their own battles!” And they are talking… 10 years, 10 drivers, 10 weekends: this is their history!

Some stories and titles in chronological order:

Andy Priaulx: The Secret of the Forever Smile

Yvan Muller: Back to the Future

Dusan Borkovic: The Unforgettable First One

Weekend with a Team

How does it look like, feel, smell, sound to spend a weekend with a team? Let us show you on two examples!

One year of victory

What happened in the 10th year of WTCC? Lots of Citroën, a pinch of irony and of course some Lada and Rob Huff as well…

Statistics of 10 years
It was a really hard work to create this chapter! (Special thanks go to Botond Bakay!)

Layout of the book

Same book will be available in e-book format, should somebody prefer e-books.

When we asked the drivers to write about their best racing weekend ever, we gave birth to the charity side of this book-project as well. Every driver who was ready to tell his story could name a charity organisation he wishes to support.

If you order a book we will ask you to pay the posting fee for us (so we can post it for you). After that you can decide which nominated foundation you wish to support, and you can send that amount for them what you would have paid for a book like this in your country. We know that it’s not a great help, but we hope that this little help also will mean something for them.

The organizations and the drivers:

* The Novak Djokovic Foundation asked the organizers of this project for not to be involved it for technical reasons. (01. 09. 2015.) Instead them the driver nominated the annual charity Johnny Herbert Karting Challenge as beneficiary, 12. 09. 2015. In the year 2015 the JHKC was organized for supporting KartForce.